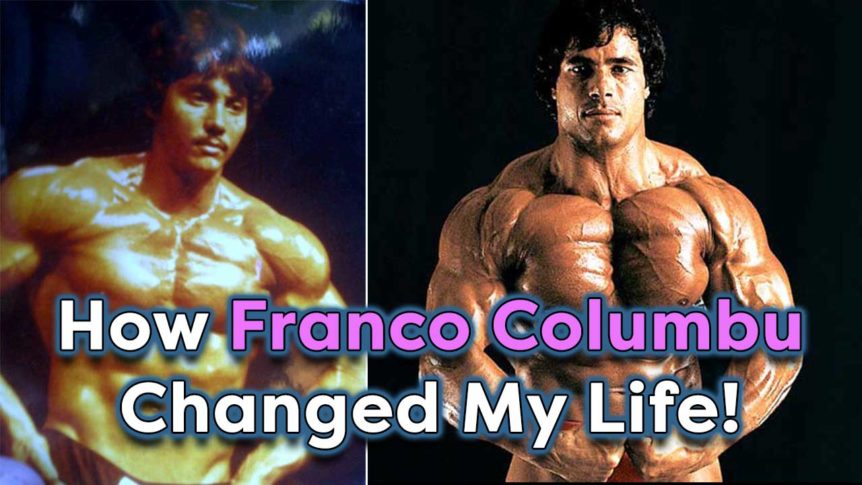 I want to share with you how Dr. Franco Columbu radically changed the whole direction, and destiny of my life. As we all know the legend Dr. Franco Columbu died at 78 from a drowning accident. Franco was one of the most treasured heroes of the “Bodybuilding and Chiropractic Community”.

Franco had inspired a few generations of athletes and doctors to follow their dreams like he has, especially being an immigrant from Sardinia. His unexpected death has affected so many people around the world.

In our lives, we always have several key people that help us make decisions for the good (and sometimes for the bad), give us inspiration to go on or just change our direction of life to some degree. The brief time I spent with Franco over a period of a few months changed my whole life.

As a young lad of about 18-19 years old, I got a chance to help build Franco’s room addition to his house in Los Angeles for several months.

Above Picture: 1979 – I was 18-19 years old competing in “Bodybuilding Teen Category” inspired by Franco.

At that time of my life, I was really into competing in bodybuilding and wanting to become a Medical Doctor specializing in Plastic Surgery, or Orthopedic Surgery. For those 5 years, I was 100% certain I was going to be a medical doctor/surgeon of some type, until I met Franco and his wife Dr. Anita Columbu.

Franco was not only a legend in the bodybuilding and strength communities, but he and his wife were also successful Doctors of Chiropractic, and don’t forget Franco was young Arnold Schwarzenegger’s training partner and best friend. So, I was very impressed by him being a bodybuilder and a doctor.

Francesco Maria Columbu (August 7, 1941 – August 30, 2019) was an Italian bodybuilder, powerlifter, actor, and author. Originally a boxer, Columbu won the Mr. Olympia in 1976 and 1981, and competed in the inaugural edition of the World’s Strongest Man in 1977, where he placed fifth – src: https://en.wikipedia.org/wiki/Franco_Columbu

I had never been to a chiropractic doctor before, so I really had no idea what that profession really was all about. Over the next few weeks assisting in building Francos room addition, I got a chance to talk to Franco daily and eat dinner with them several times, talking about bodybuilding and my aspirations to become a “Medical Doctor”, as well as work in the medical field along with bodybuilding. Similar to his life so far.

I was very interested to see what a Doctor of Chiropractic Specialties are in medical practice. Franco and Anita invited me over to see their Chiropractic Medical offices in West Los Angeles, so I could get a better understanding of the profession and my first chiropractic adjustment from Franco.

Since, Franco was born on the island of Sardinia and my family were all from the island of Malta just a few hundred miles away, I really felt connected to him and what he was all about.

From this point on in my life, I completely changed my career to becoming an “Alternative Chiropractic Doctor” from my brief discussions and inspiration I had with Franco. I was not only interested in how the body works, but I also wanted to transfer the knowledge to my personal body physiology as an experiment and start to learn more about how the body could be sculpted like clay in the gym, to be an excellent example of health.

I wanted to be a “Super Knowledgeable Walking Live Anatomy Chart of Health” like Franco was, and be a successful practicing clinical doctor to help people transform their lives. I was trying to emulate a small part of his lifestyle and success in my own way.

In the months to come, Franco came over to our gym to give a seminar on bodybuilding, diet, exercise and his philosophy on life. He blew up a hot water bottle for us and ripped a thick telephone book in half to show some of his strengths he had earned.

Franco is short in stature, standing only 5’ 5″ and competed at 185 lbs of solid muscle, and he was strong as an ox!

He was not only one of my heroes, but also a mentor in inspiration that took me from the medical world of drugs and surgery, to another form of medicine using natural and more holistic ways of healing instead of most of the medical fields who are only managing care with synthetic chemicals or surgery.

This picture above with Franco Columbu was taken in 1980. I was 19 years old and on the right side of Franco, and my brother Mark Cassar is on the left side of Franco. The legend of bodybuilding and successful doctor spent the entire day with our group with philosophy, inspiration and a demonstration at my local gym “Conejo Valley Gym”. I was working as a physical trainer and manager of the gym.

All of us were so excited to have one of the legends of bodybuilding come and talk to us, and inspire us about our futures we could have with hard work.

At 19 years old, I had aspirations of becoming positively something greater than I was today.

Again, I was on my road to becoming a medical doctor and just by pure coincidence or fate meeting Franco I was catapulted into a new way of thinking and direction of a natural holistic healing approach of medicine.

It was perfect timing for me to be inspired by Franco, because I was making big career decisions for the next 10-20+ years of my life.

In your life, hopefully you will have several people change your destiny and hopefully for the better.

Franco spent the time into taking me to his office to see his practice was enough to make me feel that a career in “Chiropractic Medicine” was the right direction for me.

A Great Movie to Watch Is: Five People You Meet In Heaven. It is an excellent story to let us see our lives from behind the scenes and how important our lives really are when we take a look back in time of how our actions or others actions changed our destiny.

“On his 83rd birthday, Eddie (Voight), a war vet and a maintenance worker at the Ruby Pier amusement park, dies while trying to save a girl who is sitting under a falling ride.” – Watch “The Five People You Meet in Heaven” on Netflix Today.

Just like Franco changed my whole life story and many others like me, I have also inspired many people for the past 40+ years about health and wellness, as I was inspired by Franco and Anita.

Personally, I have stimulated and inspired my family, friends and patients to become a “Doctor of Chiropractic” as I am sure this type of “Inspiration” is really contagious when it happens to you, and then you must pass the inspiration on to someone else.

You would be surprised how many people we all have helped change or how someone has helped you steer in a new direction in life, and the cascading altering effects from that day forward.

I graduated medical school in 1984, as the youngest graduate of Cleveland Chiropractic College as well as receiving my Bachelor of Science degree at 23 years old.

When Franco found out I was serious about starting Chiropractic school, he went out of his way and called the college to put in a good word for me. I am sure his conversation with the dean of the school also helped me get accepted to the college, over those that did not make it.

I have been a licensed Doctor of Chiropractic since April 1984. Over a 15 year period I got a chance to clinically practice and see over 100,000 patient office visits. I cannot even believe I served that many in my private practice myself. My office schedule was 6 days a week – 8:30AM to 7PM for 13 years and I was always ready to see an emergency patient at night, or on Sundays.

I always wonder if I did not meet Franco and Anita at that very special time in my life, who knows what my path of becoming a “Medical Doctor” would have been. I am so glad I took the “Naturalistic Approach” to healing instead of the “Big Chemical Pharma and the Surgery Approach”.

Thank you Franco and Anita for helping me make the right decision of my life, so I became the person I am! 🙂

So, the moral of the story is: We are all constantly changing people’s direction by either putting in the time to inspire with logic and reason, or not.

“Not All Change is Good” that’s for sure but in my circumstance I am so glad I was inspired to take the route of a more natural method of healing rather than becoming a “Pill Pushing Petrochemical Pimp” we call most of the medical profession handing out opiates, antibiotics or anti-life pills, cholesterol lowering drugs like they were candy.

All of the highly addictive chemicals we call antidepressants, opiates, sleep medication, amphetamines and sedatives are of the most commonly abused and prescribed. I would have probably handed out by now thousands of prescriptions of dangerous synthetic chemicals and other super addictive synthetic compounds.

Don’t get me wrong, synthetic medicines we call legal medical prescriptions do have their place in medicine, especially in the emergency care department, But the drugs I see that are being handed out to help manage peoples symptoms are not getting to the root cause of the sickness, disease or dysfunction.

Again, thank you Franco and Anita for taking the time with me almost 40 years ago to show me a little piece of your world that totally changed the direction of my life, and all of the life changing experiences I have had because I took this natural healing route versus the chemical approach to healing.

Recommended Categories and Courses: Quantum Exercise, Becoming Your Own Doctor for Health and Wellness, Rethinking Reality, Franco Columbu Blows Up A Water Bottle.

Hope you enjoy this “How Franco Columbu Changed My Life” Video :))