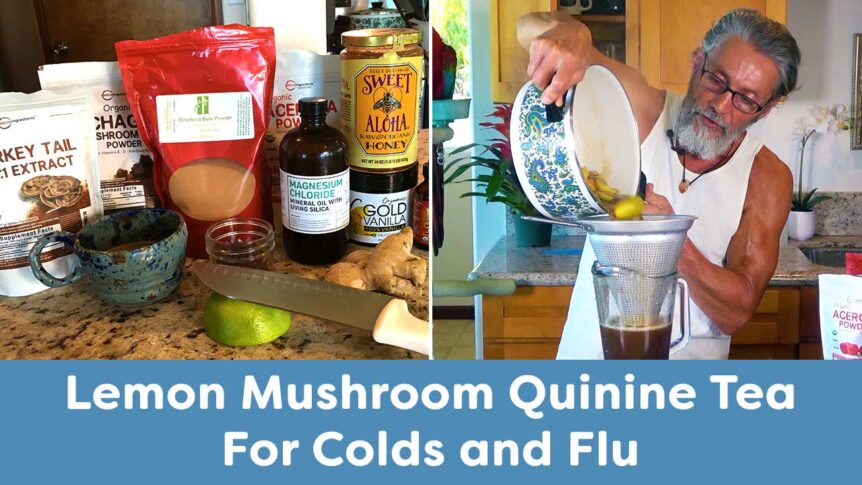 I am going to show you a quinine recipe used by the Amazon Shamans for the common cold, flu, parasites, malaria, insect bites, constipation, arthritis and many other illnesses and ailments.

This is one of my favorite medicinal teas I like to drink 2-3 times a month, or if I feel like I’m catching a cold and not feeling good.

The main ingredient is a compound called quinine which comes from the skin of grapefruit, or the bark of the Cinchona tree, to get a natural source.

I learned this medicinal recipe from the medicine shamans, also known as the medicine plant people of the deep jungles of the Amazon, when I was visiting Peru a few years ago. I got a chance to learn how the shamans use the forests plants for most of the medicines they create, to treat the local town people with various types of sickness from physical, mental and emotional dysfunctions and sickness.

The Shamans use this type of a natural quinine recipe for people who have malaria, intestinal bloating or irritation, parasites, malaria, cold or flu symptoms, and for many other ailments and illnesses.

Quinine is synthesized by the Cinchona tree and most commonly extracted from the bark. Most alkaloids are extremely bitter and this bitterness is the plant’s defense against insects and herbivores that want to eat it. Studies have proven that, if ingested, the unpalatable bitter flavor of the quinine in the cinchona plant will disrupt the normal developmental processes of pest insect populations, ultimately leading to their own demise. The Cinchona plant produces its own pesticide called quinine.

Many plants have their own specialized defense mechanisms to deter insects and other herbivores from eating them. The cinchona plant is very special because of the selective quinine it produces that can be used for medicinal purposes.

Remember, the dose is always the poison. The more you take the more dangerous the medicine or poison becomes.

The shamans and literature preclude the quinine compound in the cinchona plant possesses fever-reducing, painkilling and anti-inflammatory properties but, most importantly, it supposedly kills the deadly, mosquito-borne Plasmodium parasite that causes malaria.

How many people died from malaria in 2019?

However, accelerated efforts are needed to reduce infections and deaths in the hardest-hit countries, as progress stalls. Last year, malaria afflicted 228 million people and killed an estimated 405,000, mostly in sub-Saharan Africa.Dec 4, 2019, according to the world Health Organization – src: World Malaria Report 2019 – World | ReliefWeb

What Is Cinchona Bark Used For?

Cinchona is a tree. People use the bark to make medicine. Cinchona is used for increasing appetite; promoting the release of digestive juices; and treating bloating, fullness, and other stomach problems. It is also used for blood vessel disorders including hemorrhoids, varicose veins, and leg cramps – src: Cinchona: Health Benefits, Uses, Side Effects, Dosage & Interactions

When Spanish colonists recognized the potential of this miracle drug (found in the bark of the Cinchona tree) they knew they’d struck gold. There are more than 40 species of Cinchona tree and all are native to the Amazonian, Peru rainforests. The plant has the magical ability to treat malaria, fever, pain, and anxiety.

It is also a pretty fantastic killer of most things that try to invade the body, recognized as an anti-fungal, anti-microbial, and anti-parasitic. In the scientific community, quinine is also famous as being the first chemical compound successfully used to treat an infectious disease, malaria.

Is Cinchona Bark Safe To Ingest?

Cinchona bark seems to be safe for most people when used appropriately. However, in large amounts, cinchona is UNSAFE and can be deadly. Symptoms of overdose include ringing of the ears, headache, nausea, diarrhea, and vision disturbances – src: Cinchona: Health Benefits, Uses, Side Effects, Dosage & Interactions

Cinchona Genus of evergreen trees native to the Andes and grown in South America, Indonesia and Congo.

Quinine is made from the bark of the cinchona tree and has been used to treat malaria (a disease caused by parasites that infect the red blood cells) for almost 400 years, according to a paper published May 2011 in Malaria Journal. However, quinine can have serious side effects. Quinine can also be found in grapefruit skins but is more concentrated in the cinchona bark tree.

Quinine is found naturally in grapefruit skins, real tonic water and the cinchona tree bark. Cinchona bark can be anywhere from 3-16% of the total weight in quinine compounds.

What Does Quinine Do To The Body?

“Quinine is used to treat uncomplicated malaria, a disease caused by parasites. Parasites that cause malaria typically enter the body through the bite of a mosquito. Malaria is common in areas such as Africa, South America, and Southern Asia” – src: Quinine Uses, Side Effects & Warnings – Drugs.com

The juice, or grapefruit itself, contains valuable and natural quinine, which is advantageous for the treatment of malaria. The quinine can be easily extracted from the fruits by boiling a quarter of grapefruit and straining the pulp – src: Time to get grapefruit juice back on the menu – Fruit Juice Focus

Natural Quinine found in grapefruit skins is much smaller quantities than cinchona bark.

For many people, grapefruits are easily accessed locally to be able to make this quinine therapy drink. You will have to purchase the cinchona bark online and a lot of the time it’s not available because of people learning about the quinine concentration in the cinchona bark for certain illnesses like malaria, parasites, leg cramps, insect bites and many other ailments.

I would not recommend using both the cinchona bark and grapefruit together, because I’m not sure how much quinine you will be getting. I will either use the grapefruits or the cinchona bark, one or the other. I have never had any negative problems using the quinine. I did try this quinine recipe cautiously at first to make sure I was ok with the recipe.

Personally, I have no idea how much quinine is in the grapefruit, especially when each species of grapefruit could have more or less. How and where the plant was grown all have a factor on the concentration of quinine in the fruit.

Since I am following the shaman jungle recipe protocols, they said they have been using this recipe for many tens of decades. The longer you boil the recipe the more quinine will be leached out of the cinchona bark, or the grapefruit peels.

Just like any new therapy, I always recommend: it’s always good to start slowly and work your way up a little at a time.

In the United States, the US Food and Drug Administration (FDA) limits the quinine content in tonic water to 83 ppm (83 mg per liter if calculated by mass), while the daily therapeutic dose of quinine is in the range of 500–1000 mg, and 10 mg/kg every eight hours for effective malaria prevention (2100 mg daily for a 70… – src: Tonic water – Wikipedia

Tonic water has very small quantities of quinine in it. The max amount allowed in tonic water is 83 mg per liter found in the commercial market. The amount of quinine in a liter of water is a much lower concentration than the 500 to 2000 mg of the therapeutic dose of pharmaceutical grade quinine tablets.

Quinine is limited in tonic water in order to prevent toxicity. The amount of tonic water you would have to drink to reap of the health benefits from quinine is approximately 60 ounces. Originally used as a prophylactic and treatment for malaria.

Scientists say there is no therapeutic effect with this low concentration of quinine found in tonic water, unless you drink about 60+ ounces or 2+ liters of tonic water at a time.

What Are The Negative Effects Of Quinine?

Some of the possible side effects of taking quinine as a medication include: abnormal heartbeat. kidney damage and severe allergic reaction.

However, potential side effects of quinine can include:

Quinine in tonic water: Safety, side effects, and possible benefits

Question: It’s been suggested that drinking 2 to 3 ounces of tonic water before bedtime can prevent leg cramps at night. Is that true?

Answer: Tonic water—and the quinine it contains—have been promoted for preventing leg cramps for decades despite the lack of evidence that they are effective. Quinine is FDA-approved only for treating malaria and is sold with a warning against using it to treat leg cramps or muscle pain, because it increases the risk of bleeding and heart rhythm disturbances.

Tonic water contains no more than 83 mg of quinine per liter—a much lower concentration than the 500 to 1,000 mg in the therapeutic dose of quinine tablets. Drinking a few ounces of tonic water shouldn’t be harmful, but it isn’t likely to prevent your leg cramps – src: Harvard Health Medical School Publishing

Who Should Not Take Quinine?

You should not take quinine if you have a heart rhythm disorder called Long QT syndrome, a genetic enzyme deficiency called glucose-6-phosphate dehydrogenase deficiency (G-6-PD), myasthenia gravis, optic neuritis (inflammation of the nerves in your eyes), if you have taken quinine in the past and it caused a blood cell… – src: Quinine Uses, Side Effects & Warnings – Drugs.com

Is Chloroquine And Quinine The Same?

Quinine is an antimalarial drug which is made from Cinchona bark[9]. The mode of action of quinine is similar to chloroquine. … Quinine alone or with other antimalarial medications is used to treat malaria cases especially in pregnant women near delivery[12] -src: Comparative study of chloroquine and quinine on malaria rodents and their effects on the mouse testis

I strongly recommend you read the entire description to be more familiar with the natural forms of quinine, and the precautions and warnings of this compound. 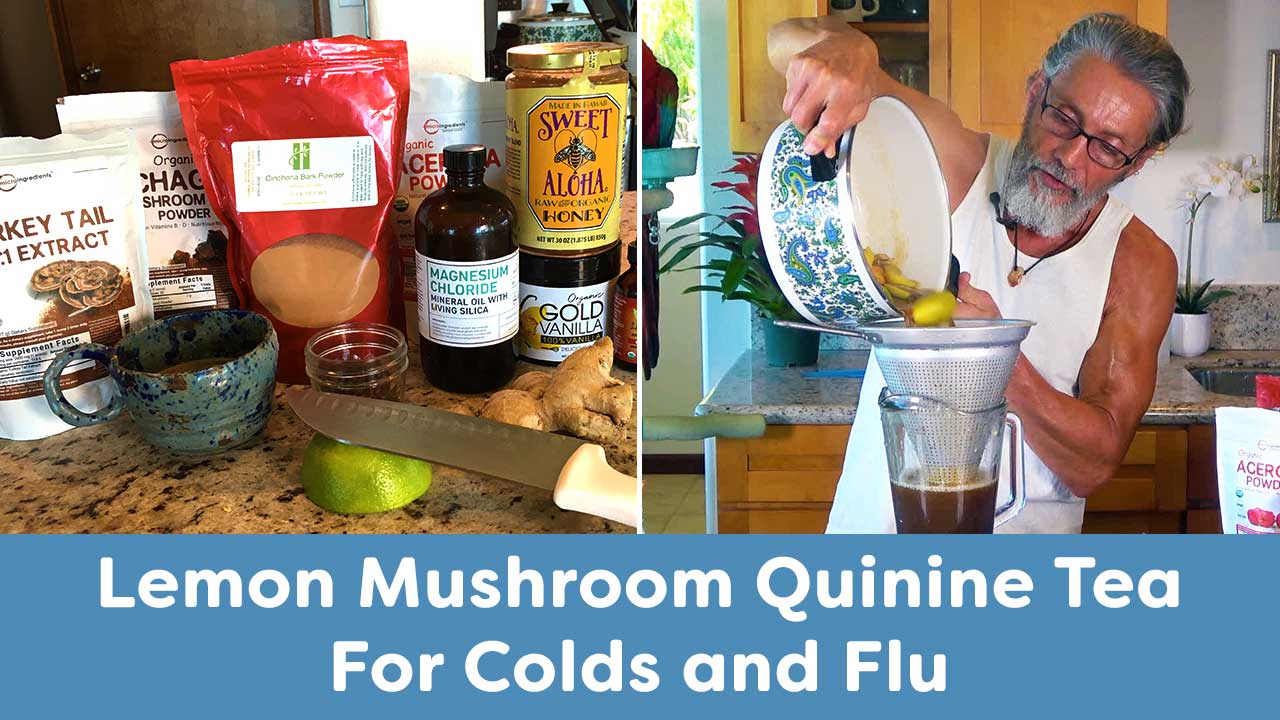