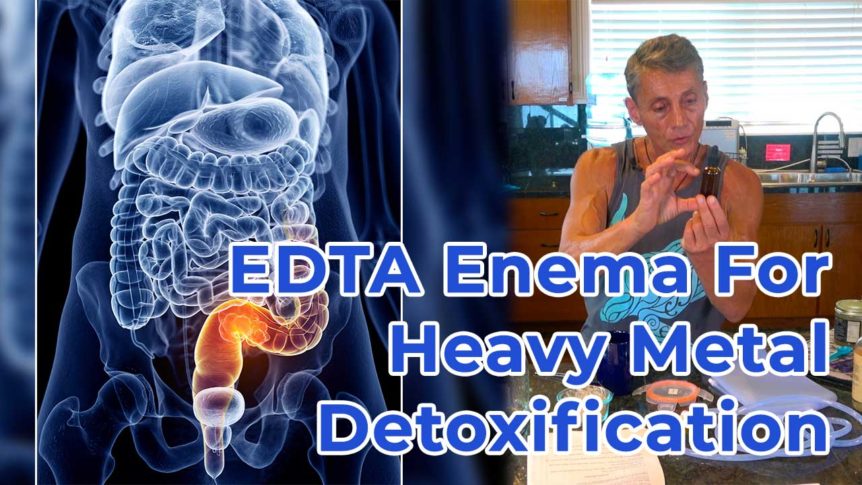 I am going to share with you a very effective way I have used EDTA (EthyleneDiamineTetraaceticAcid) as an Enema Protocol for supporting the removal of Heavy Metals and other bodily contaminants.

EDTA is another controversial Detoxification Therapy in the mainstream medical literature. In this article the FDA states that there are no authorized over the counter use of EDTA.

EDTA can be bought over the counter (OTC) but I have found that administration must be used with caution, and always in low dosages for physicians or people wanting to experiment with this, or any new or controversial therapeutic protocols for removal of heavy metal and other forms of contaminants or detoxification.

This course is to show you how I have used the EDTA enema protocols personally, and in my practice with excellent results, when used in low dosages rectally supporting heavy metal detoxification.

EDTA can be administered by a licensed physician, usually by using a needle or IV (Intravenous Drip Injection). IV treatment usually takes about 30-45 minutes in a doctor’s office that is familiar with this type of “EDTA IV Treatment Protocol“.

I have found the EDTA enema protocols have many benefits versus EDTA orally, or even an expensive and time consuming IV drip. One of the reasons many people will want to use the enema approach, is to minimize the nausea sometimes associated with taking orally.

Enema EDTA is very inexpensive and is a good way to bypass the stomach/small intestines to reduce stomach cramping most people will experience when taking various amounts of EDTA orally.

I like to use EDTA in many modes of application like the protocols using the EDTA Skin Cream, as this way I can use EDTA topically in different areas of the body for skin and tissues, just below the skin or into the joint areas. Making this recipe is very easy and very economical to use.

I also feel there is a benefit when I am using very small doses of “EDTA Orally” because of the intestinal detox and cleansing ability that I receive.

Lastly the “EDTA Liquid Enema” which is probably the most effective and economical way to use EDTA for quick absorption and assimilability.

Personally, I don’t really like IV because of the time, money and getting stabbed in the arm over and over again. Using the IV does have the benefit of bypassing the stomach to alleviate the intestinal side effects, but they are very expensive and you have to go to the doctors office usually for 60 minutes, or longer for the treatment.

I also like to use the “Soaking the Hands and Feet with EDTA” technique for administering EDTA in a Vodka, 6% H202 mixed solution.

Each of the different ways to administer EDTA are all valid as far as functionality and are very effective when used with a maintenance or therapeutic schedule (Ask your physician for advice).

The colon is an excellent way to transport many compounds into the body via the intestines using enema protocols.

When EDTA is introduced into the colon with either rectal suppositories or liquid enema protocols, the EDTA will be dispersed via the large intestines into the body, fully absorbed within 30-90 minutes.

The “Half Life of EDTA” in the body can be up to 8 hours, and is mostly excreted through the kidneys, bowels, urine and with increased perspiration using a FIR sauna within 24-48 hours of treatment, and plenty of distilled water to help reduce the toxicity that the EDTA supports chelating and removing.

Ethylenediamine tetraacetic acid (EDTA) is a synthetic amino acid and is a powerful chelating agent. EDTA is capable of forming tight bonds with a variety of toxic heavy metals and had been researched and studied for dissolving calcium oxalate crystals wherein the body could dispose more easily through the urine or sweat.

“A specific salt of EDTA, known as sodium calcium edetate, is used to bind metal ions in the practice of chelation therapy, such as for treating mercury and lead poisoning. It is used in a similar manner to remove excess iron from the body. …EDTA is used extensively in the analysis of blood – src: Ethylenediaminetetraacetic acid

EDTA therapy has also been shown to be effective for the reduction and elimination of arterial plaque in studies (see articles below).

EDTA Chelation Therapy is known to be safe in very small doses and is effective in various forms of administration such as topically, orally, IV, suppository or enema.

Please See More About EDTA In This Course: What is EDTA?

EDTA Rectal Suppositories can be bought over the counter in the USA and are used as a heavy metal detoxification compound. Suppositories are quite expensive and I feel that the low dose enema bag recipe is a more effective, safe and economical way to administer the EDTA rectally with the use of a Non Toxic Enema Bag.

Rectal suppositories are usually made with cacao butter, and the strength is usually 900-1250 mg for each EDTA/suppository.

Personally, I really do not like the rectal EDTA suppositories because they irritate my colon when I use them in the way the directions say.

If you are going to use the store bought EDTA suppositories, personally I would recommend not taking the EDTA suppositories daily as prescribed on the directions if you have any inflammation, bleeding in the small or large intestines.

I would cycle the EDTA suppositories 3 days on and 3 days off for 30-60 days at a time.

This type of “3 days on and 3 days off” EDTA protocols is to support removal of the poisons, chemicals and Heavy Metals etc. out of your body when resting between cycles.

If at any time, I get any colon irritation or inflammation I will stop further treatment, and not do another treatment until I am feeling good again to experiment with another cycle.

Many patients have reported over the years that if they use the EDTA suppositories daily, as suggested, they seem to get some intestinal inflammation or irritation.

One of the reasons I don’t like to use the suppositories daily is because I feel the EDTA is not being dispersed in a large enough area if you have any symptoms of IBS, colitis or bleeding in the rectum areas.

When I use the Liquid EDTA Enema I make I do not get any rectal inflammation, and I will use the “3 days on and 3 days off” protocol for a few weeks at a time for 1-2 months.

If I have any colon inflammation or inflammatory bowels, diarrhea etc. from using the EDTA suppositories, I will not use them again until my intestines are more stable, and feeling and functioning normal.

Once again, the EDTA suppository enters the colon with the shape of a small finger sized shape in the form of a suppository. The EDTA is slowly dispersed into the colon over a period of 60-90 minutes to be absorbed. For some people irritating the disbursement area in the colon where the EDTA is being absorbed.

The liquid EDTA enema protocols are easy, efficient and economical to make yourself. I like to use the EDTA in the enema bag instead of the suppository protocols because I feel the enema is less irritating and has better and deeper absorption into the colon when using the enema bag.

Using a silicone enema bag, or an enema syringe with a combination of 4-8 oz of distilled water mixed with EDTA, has the ability to enter much deeper into the colon thus spreading out the dose over a larger area of the colon for absorption and less irritation as well as more effective for absorption and detoxification of the intestines.

Benefits of the EDTA Enema

The EDTA enema uses 4-8 oz of distilled water mixed with a small dose of EDTA for better absorption and less irritation to the intestines, due to a larger distribution of the compound diluted with water.

The cost of EDTA IV therapy is very expensive and usually way over most people’s budget with the time it takes, and the expense to go to the doctor’s office.

The EDTA suppositories do not penetrate or enter deep into the colon as the Liquid EDTA Enema does.

I have experimented with both EDTA rectal and Enema therapies many times. The EDTA enemas are much more effective, less irritating, side effects and are a fraction of the cost of rectal EDTA suppositories you would buy pre-made.

The information below is from the Kelate 4 Life Suppositories 1250mg Calcium Disodium EDTA. This is an acceptable product but it is quite expensive for a 30 day supply.

Kelatox is sold as an EDTA product for heavy metal removal and costs $129.00 for 30 suppositories, each having the strength of 1250 mg which is approximately ¼ tsp of EDTA in each suppository.

Personally, I like to make and measure my own dose of EDTA at a fraction of the cost of buying them, administered using the enema protocol below.

It’s very easy to measure you own compounds for any recipe with the simple understandings of the conversion chart.

Recommended Courses and Categories: What is EDTA?, EDTA Skin Cream For Heavy Metal Detoxification and Soaking the Hands and Feet with EDTA.

WARNING: I recommend seeking the advice and supervision of a licensed health professional before using any type of detoxification practices. Also, it is always a good idea to learn how to do your own investigation via the internet, research papers and other people that have used these practices before attempting to use.

I have found that EDTA can cause some individuals to become very intestinal disruptive with even low doses of EDTA.

Again, I always recommend people to do your homework and/or seek medical advice before using EDTA and/or any other therapies you are not familiar with.

If pregnant or lactating, consult your physician before taking this product. Keep out of the reach of children. Do not exceed recommended low dose.

These statements have not been evaluated by the Food and Drug Administration. This Product (EDTA) is not intended to diagnose, treat, cure or prevent any disease. 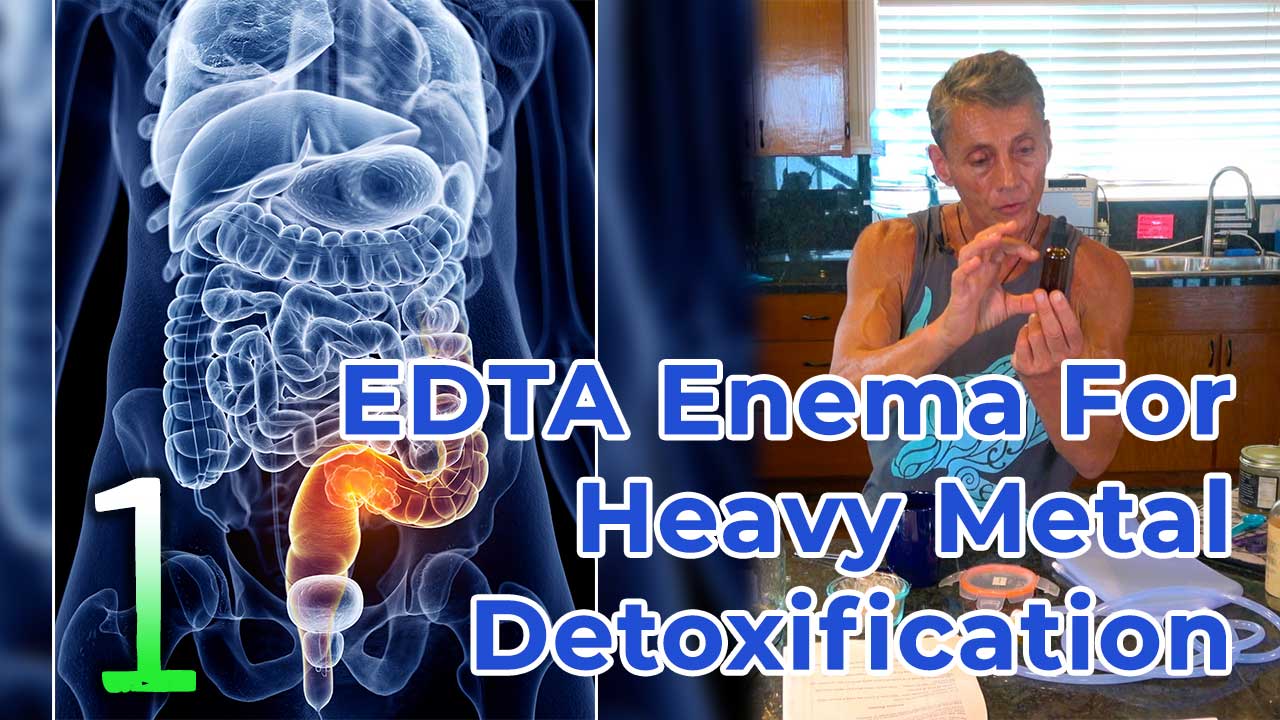 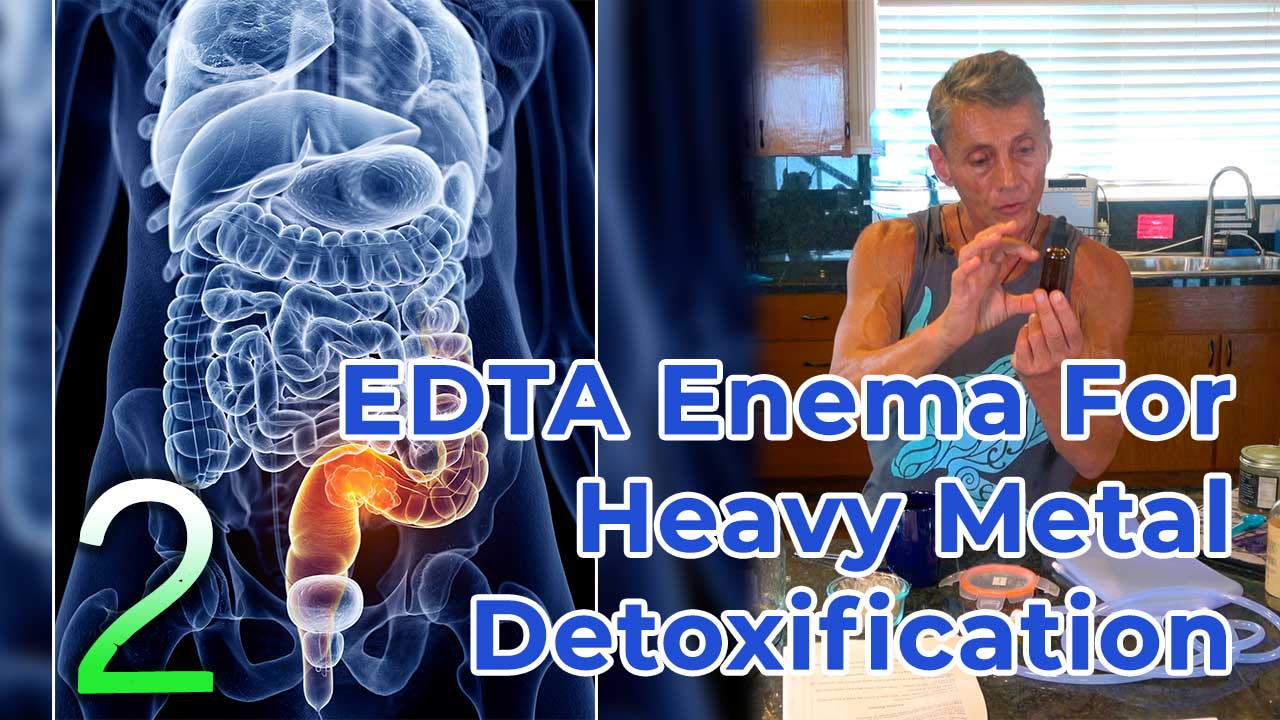